What is kendo? A traditional Japanese sword-contact sport/martial art. Founded from the times of the samurai or something. IDK but its derived from kenjutsu and is a fast paced combat sport common in Japan and Korea. You wear special bogu (armor) and fight with shinais (bamboo swords), all the while trying to score an ippon (point). There are 4 essential targets in kendo: "men" (head), "kote" (wrist), "do"(waist), and "tsuki"(throat). 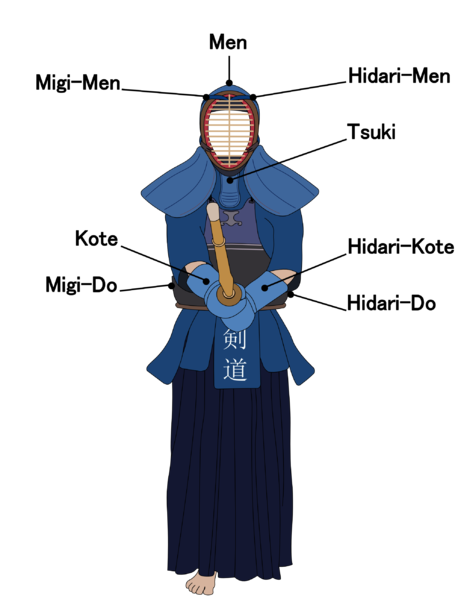 You have to wear this formal manskirt thingy that the Japanese wear called hakamas with a light jersey called gi under your armor. When not fighting in shiais(tournaments), you will prob spend most of your time practicing exercises and strikes or memorizing "kata". This practice is done with a wooden katana called a bokken. The kata is an exam where you demonstrate segments of kenjutsu in order to rank up.

The rules of kendo are straight forward. First to strike target with correct zanshin = 1 ippon (point). Strike needs correct kiai and posture to score or shimpan won’t count! First to score 2 ippons wins! Ringed out of court/foul = counts as 1 penalty. 2 penalties = 1 ippon for opponent. Timer runs out, nobody scores = stalemate.


Zanshin is unbroken concentration in kendo. By focusing your attack and following through, it enables you to spot opportunities or openings for attack. People who have good zanshin are usually fast with their reactions and timing. It's also often used to make opponents anticipate the next move.


Everytime you strike in kendo, you yell out a kiai, or a shout. This is done to show your spirit/power, which is often seen in other martial arts as well like karate or taekwondo. People use this tactic to intimidate each other with kiai or force opponents to make a move. Basically its like a war cry so you can scare people as you slaughter them.


Mannerisms are a vital part of kendo. Every week, we have to wash the floors and keep our dojo clean. It is also part of tradition to bow before a match or before stepping foot into a dojo. When wearing armor or picking up our shinais, we always place one knee on the floor as a sign of honor and respect. At times, you can see people sitting in a seiza-style position.


Wazas, aka techniques, are broken down into two main styles. There is shikake waza, which means offensive attack, and then there is oji waza, or counter attack. A strike like debana men would be considered a shikake waza, since it is executed at the same time as an opponents strike in the offense manner. Disarming a shinai or hidari men would be considered an oji waza, as you are executing these strikes prior to the opponent's attack in an act of defense. There's a big controversy over whether there is such thing as defense in "true" kendo. I like to believe that there is such a thing as defense in kendo; however there is a wise saying: the best offense is also the best defense.


Do = close dist
-arms over head
-opp step fwd attack men (close range only), bait them into you by using your body and use their momentum to do a one hand do strike ( closing the dist so that you can hit them at do dist), you can also feint to bring in opp

Hiki kote
-bring in right arm so that you can hit target at close range (dont extend arm!) and drop your body so u can hit it
-opp blocking men

Hiki men
-opp pushes against you, use that force to help you go backwards as you strike men
-opp seme drops to the side

from hikimen use the back leg to step first before strike

men = dist from opponent, seme is still the same

Many argue that kendo is more a psychological game than physical.


My friends got me introduced to kendo in middleschool, but ultimately it was my brother who inspired me to join. It peaked my interest because i thought sword fighting was such a badass martial art, but seeing my brother being able to whoop my ass AND look like some dude straight outta Sword Art Online made me jealous and determined to try it out. I can still remember the day Kevin and Daniel talked about how I was so lame for trying to join them years after they did, how it would take me forever to reach any decent rank close to them. But I didnt care, comparing myself to them was something I didn't even try.


Kendo really changed my life for the best. It took me a whole two years to reach 3rd kyu, and by this time I was already a graduate from highschool and entering freshmen year of college. In kendo. ranks are based from 6 kyu to 1 kyu, from low to high. Then, after first kyu you reach Dan level, which goes from first Dan to 8th dan. Dan is very difficult! For input, my sensei is only 4th Dan. Kevin and my brother quit by this time, and soon after Daniel gave up on kendo. They found it boring, now that they were all thinking about their futures and stuff. Kendo brought me closer to people in general. We had swapped our old sensei with a new female teacher, and an assistant teacher named Min. Min was super chill, saw potential in us and taught us something new every week. I also made lots of friends there, like Brian, that one blonde girl (i forgot her name), and Evon. I always found Evon kinda cute, but was never brave enough to make any effort to talk to her. Maybe I should try to spark something when i return one day, hoping she hasnt quit too.


I had my first taste of victory at the age of 19 at a shiai against SF dojo in third place. They were notorious for being the best out of West Kendo Federation, kicking everyone's ass every season. What made it worse for me was that divisions were based on AGE. So someone with little experience, for example a 19 years old kid like me, can compete against someone with lots of experience at 19>. My heart was pumping so fast, adreneline rushed through my body as i took a step into the arena. For 3 minutes straight, I focused on keeping a good distance from my opponent and pushed him into submission for a chance at an opening. I remember staring into the mask of my opponent, reading his next move as he moved his lead foot past the tip of my shinai. When that happened, I instantly leapt forward and struck a clean men strike, scoring an ippon. My sensei seemed surprised that day. More important than winning tho, was that I learned and developed an inner connection with myself. I learned the importance of being humble and having a strong mentality. It gave me a boost in confidence and determination.


On the day I left to move to Pasadena, I said my farewells and departed from that dojo. It's been a strong 12 months since I last saw my sensei. I heard my mom ran into her at a restaurant once, telling her how I moved out of town to pursue my art degree. Sounds so sad on text but I guess it's worth it. Now I remember, I never got to tell my sensei I had left out of town due to a change of plans. I actually stayed with my parents til the beginning week of my second term of college. Got into a bunch of traffic accidents so they thought it was best i move closer to school to avoid the highway delays and shitty drivers of LA. I promised to return one day to my sensei on KakaoTalk.

Anyways, you probably don't remember what the fuck i just went on about for this past hour so here's a video on what I consider fun kendo.